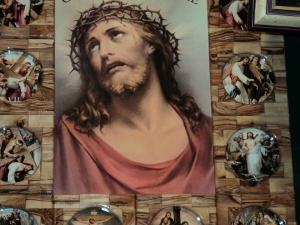 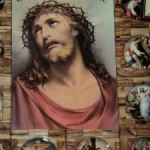 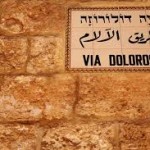 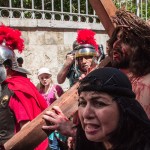 One very important place  you must   visit This Easter  is the -VIA  DOLOROSA – in JERUSALEM   Introduction The Via Dolorosa, ’Way of Sorrow’ or ‘Way of the Cross’ is Christian’s most sacred route. It is the path followed by Jesus from the Judgement Court to Golgotha, the place of the Crucifixion, bearing his Cross on his back. Every Friday at 3pm, Christian pilgrims from all over the world join the Franciscan procession to retrace these steps and recall Jesus’ agony. There are fourteen stations on the Way of the Cross, nine along the narrow street and five inside the Church of the Holy Sepulchre. All are marked by chapels or churches for meditation and prayer. Despite the hustle and bustle of the route, it is a moving spiritual experience to wander along the Way where Jesus suffered on his last day on earth 2000 years ago. 1st Station: Jesus is condemned It was in the Praetorium in the Antonia Fortress, the headquarters of the Roman garrison stationed in Jerusalem, that Jesus was tried by Pontius Pilate and condemned. Today it is the Al Omariya school and the First Station on the Via Dolorosa. (Mark 15:1)

2nd Station: Jesus takes up the Cross The Franciscan Chapel of the Flagellation and Chapel of Condemnation commemorate the sites where Jesus was scourged and given the Cross to bear. (John 19:16) The Ecce Homo Arch The arch is part of the eastern entrance to the Roman city Aelia Capitolina, constructed as an arch of triumph by Hadrian. According to tradition, this is the spot where Pilate ordered Christ to be brought forth to the Jews. (John 19:5) Lithostrotos- the Stone Pavement The large pavement of stone beneath the Church of the Sisters of Zion probably dates back to the time of the Emperor Hadrian and was the forum of Aelia Capitolina, as Hadrian named Jerusalem in the second century A.D. On the paving stones are signs of games played by the Roman soldiers. (John 19:13)

3rd Station: Jesus falls the first time The scripture of Thaddeus Zielinsky above the entrance to the Polish chapel on El-Wad Street depicts Jesus falling under the Cross. (Lamentations 1:16)

4th Station: Jesus meets his mother The Armenian-Catholic Church of Our Lady of the Spasm marks the spot where the Virgin Mary encountered Jesus. This event is not mentioned in the New Testament. (Luke 2:34)

5th Station: The Cyrenean helps Jesus carry the Cross The Fifth Station is commemorated by a Franciscan chapel. Here the Way of the Cross begins the ascent to Golgotha.( Luke 23:26)

6th Station: The veil of Veronica The Church of St. Veronica belonging to the Little Sisters of Jesus probably lies on the site of the house of Veronica, who wiped the blood and dirt from Jesus’ face with her veil and the imprint of his face was left on it. The original cloth is kept at St. Peter’s Church in Rome. The altar of the church is decorated with a candelabrum of 7 branches (Menorah). (Numbers 6:25)

7th Station: Jesus falls the second time Two chapels connected by a flight of steps mark the site where Jesus fell for the second time under the weight of the Cross. There is a Roman pillar in the chapel of the Franciscans on which the written sign of Jesus’ condemnation to death was probably written. It is believed that here was the Gate of Judgement through which Jesus left the city on his way to Golgotha. (Isaiah 63:9)

8th Station: Jesus consoles the crying women of Jerusalem On the wall of the Greek monastery of St. Charalambos is a stone with a latin cross and an inscription reading “ Jesus Christ is victorious”. ( Luke 23:28)

9th Station: Jesus falls the third time Acolumn built into the door of the Coptic church marks the site where Jesus fell for the third time. From the point, he could see the place of crucifixion. (Matthew 26:39)

10th Station: Jesus is striped of his garments The last five station of the Way of the Cross are in the Basilica of the Holy Sepulchre. A small stairway of stone leads to the Chapel of the Divestiture. (Mark 15:23)

11th Station: Here Jesus is nailed to the Cross Magnificent mosaics decorate the place where Jesus was crucified before the eyes of his mother. This holy site is guarded by the Roman Catholics. ( Luke 23:33)

12th Station: Here Jesus dies on the Cross On the spot where the crosses of Jesus and the two criminals were placed, on mount Calvary, there is now a Greek Orthodox altar and beneath it is a silver disc. Nearby is an altar of the Franciscans with a wooden bust of Mary to commemorate the sorrow of Mary at her son’s death.( Matthew 27:50) Our Lady of Dolours The Catholic altar dedicated to Our Lady of Dolours stands between the Greek and Latin altars of the Crucifixion on the Golgotha. The seventeenth century wooden statue of the Master Dolorosa was presented by the Queen of Portugal in 1778 and recalls the grief of Mary at the death of Jesus.

14 Station: Jesus is placed in the tomb The tomb of Jesus, the holiest place in Christendom, ,lies in the centre of the Church of the Holy Sepulchre beneath the main rotunda, in a beautiful decorative chapel. The sacred rock is covered with marble and above it are paintings depicting the Resurrection. (Matthew 27:59-60) Easter is a high season in Israel join millions of believers as we venerate the sufferings of Jesus In Jerusalem this April contact us to book your trip 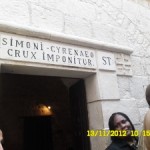 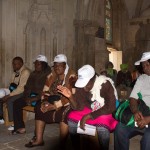 Share:
Category:Past Tours, Upcoming Agricultural Tours
Tag:Bethlehem, Easter in Jerusalem, holyland, How to travel to Jerusalem, Individual Israel trips .travel from lagos to Jerusalem, pilgrimage
PREVIOUS POST
Learn How to Farm at Songhai Center Port Novo
NEXT POST
Why you must visit Jerusalem this May 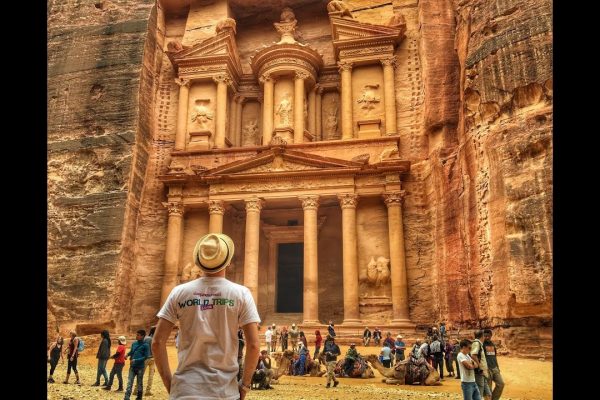 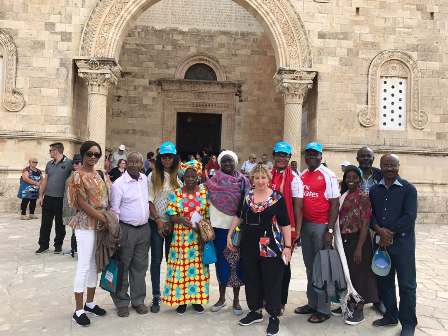